Mint state and key date listed Roosevelt Dime values is for graded, certified and authenticated coins in PCGS or NGC holders. The rest are a sample of raw coin sell but this is not a guarantee your coin with the same date, mint, grade and holder will sell for this exact value.

Also examples struck with Full Bands on torch (FB) will be worth a premium above a coin in the same grade.

Silver Roosevelt Dimes are considered junk silver to most dealers because they’re numerous, most are circulated and they don’t garner the respect of other silver dimes. You can currently buy any date and mint for $1.50 to $5.00 each, depending on the grade.

You just don’t have any key dates from 1946 through 1964 and it’s affordable to put togther a complete set in most grades.

If you’re looking for a high premium Roosevelt Dime value then you will need to look for coins that grade at least MS67 (Mint State) and with FB or FT (Fully Split Torch Bands) on the reverse.

Any date from 1946 through 1964 with FB and in the grade MS68 will be worth several hundred dollars to several thousand of dollars depending on the date and mint mark.

Most dates are still valuable in MS68 even if they don’t have FB so don’t exclude any possible high grade examples. 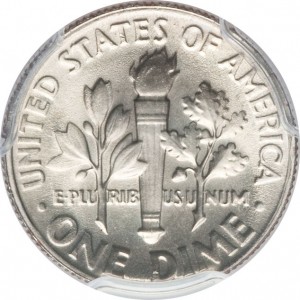 Other notable proof varieties include the 1960 and 1963 Doubled Dies.