Die sinkers were around long before Civil War Tokens became popular. They were making advertising tokens for merchants and political campaign tokens for the local races. What changed was the economy. Up until the Civil War, the metal making up the One Cent piece was worth one cent. But, as the economy fell apart, die sinkers turned there advertising trade into their own economy. Each cent was made of pure copper and worth about two-tenths of one cent. They would sell these tokens to the merchants for nine-tenths of a cent. And, the merchant would then use it as change for transactions as if it were one cent. Both the die sinker and the merchant made a profit.

Die sinking was the art form of taking a known coin, token or other metallic emblem, attaching it to a metal rod and driving the rod at high velocity into a piece of hot, soft metal. 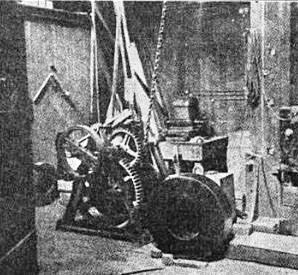 From there, the die sinker would use his engraving skills to enhance or alter the stamped features and cut away the excess. The result was a new die for the coin press. 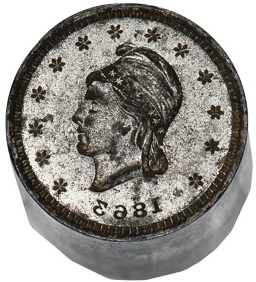 Then the metal was hardened by heating and cooling. Assuming it survived this process, it was used to mint coins in a coin press. 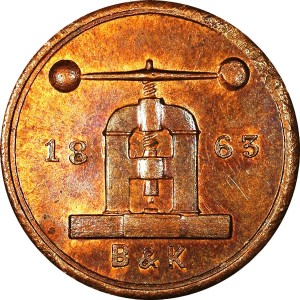 An ascription is based on original use of the die. Signed dies are in italics. If the die is thought to have been cut by someone other than the designer, then the die number will be followed with an asterisk.

From with Lower Manhattan, Bridgens served mainly New York, New Jersey, Connecticut. Bridgens had a few customers as far west as Ohio and Illinois. He manufactured tokens for both “pro-Union” and “Copperheads”. While easily available, his tokens are frequently off-center and misaligned.

Burr is assumed to be the engraver for a number of dies based on punchlinks to the store card of the Centennial Advertising Medal Company of Philadelphia. It appears he acquired a number of dies from other die sinkers and restruck them. Where possible, the original die sinker is given credit for the die. His tokens are usually poorly struck.

Dubois is only given credit for one die since most of his work was conducted from 1856-58 making them pre-Civil War. His tokens are typically on thick planchets with a stout looking style of lettering.

Escherich put out only a few tokens and all were of low quality having crudeness of design, misspelled words, and inferior workmanship.

His dies were used mainly in New York City area and boldly struck on large, heavy planchets. He apparently worked with Charles D. Horter producing both pro-Union and “Copperhead” themes.

Produced dies for the southern Michigan and northern Indiana areas, which were near his home. All are very scarce. These resemble dies made by Childs, but  a bit more crudely made.

Now, here is a guy who knew how do diversify. Higgins was an optician. He made barometers, guns and false teeth. His tokens turned out to be some of the most charming and decorative of all Civil War tokens. Well accepted, these tokens are rarely found in better than VF and most were weakly struck. Originally, these tokens were known as the “Indiana Primitives” and today are quite scarce. Higgins didn’t mind borrowing dies from Waterbury or Scovill. Higgins was very pro-Union.

Horter tokens mostly circulated in New York City area. Most are small, light weight, but well struck while his workmanship was of uneven quality. Some strikes are bold and even , and others faint, uneven and worn or rusty. His shop was across the street from Emil Sigel and there is evidence of the two swapping dies. He was strongly pro-Union and his tokens are easily obtained.

Dies: None (In the 3rd edition of PCWT, five dies were attributed to J. A. Hughes. These have been re-assigned to Lanphear.) It is thought that Hughes worked for Lanphear.

Strictly made tokens for the Cincinnati area. Their tokens are thin, slightly large planchets, engraved in low relief and poorly struck. Often these dies are multiple struck and in an advanced state of deterioration.

The Key firm was notorious for the indiscriminate restriking of tokens. Some dies being re-used in 1870 and one as late as 1939 at a coin show in Chicago. Many off-metal tokens exist, but all are likely restrikes. These tokens typically show high quality workmanship. William H. Key became a US Mint engraver in the 1860’s.

Koehler worked from the Baltimore area and only produced a few patriotic tokens.

The actual name of this engraver is unknown, but his tokens are identified by the use of a single initial, “L”.

Lanphear ran a large operation in Cincinnati, Ohio with customers across several Union states. But, he mostly produced Store Cards. He employed some of the other die cutters listed, such as Frederick Lutz, J. Hughes, and Greg Wright. Dies signed by these die cutters have been attributed to Lanphear. His tokens are usually well struck. Misspellings and re-engraved dies are common. Embellishments to existing dies was also common. Lanphear made a few “half store cards.”

Dies: None (All have been re-assigned to H. and W. Johnston.)

Lovett was well known for his quality work. His family’s trade was engraving.

Brother of John (above), he was known for his presidential campaign buttons of 1864. His workmanship was high quality. Planchets were thick, strikes bold with fine details. However, he was best known for his Confederate Cents.

Dies: None (All have been re-assigned to Lanphear since Lutz was determined to work for Lanphear.)

A busy man as he, along with his business associate, Peter Mossin, produced almost all of Milwaukee’s Civil War store cards. His tokens are on thick, larger planchets with upset rims. His strikes produced high relief devices and denticles. Unfortunately, he only produced a few patriotic tokens.

One of the few die sinkers to use lower case lettering, he had a very distinct style. All his work appears to be hand-engraved, including the lettering. But, he also indiscriminately muled his dies with old button dies and obsolete token dies. Caution is advised with his tokens as most are likely restrikes of dies originally used on store cards or buttons.

Originator of only a few patriotic Civil War tokens, he made a plethra of Civil War store cards. He seems to be responsible for a number of the oversize (24mm) planchet tokens in New York. It is believed he had a working relationship with Emil Sigel. 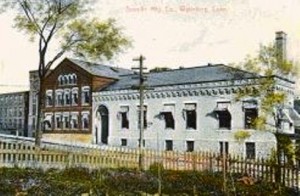 This firm is still in business and listed among the Fortune 500. Responsible for a large number of both store cards and patriotic tokens. These tokens are frequently found in uncirculated condition with raised, squared-off rims and beaded borders. The central designs are sometimes sunk from hubs. Strikes are typically high relief and bold.

Probably the most prolific Civil War token maker, his tokens were circulated widely. Workmanship is good bearing few chips, overstikes or cuds. His designs are well executed, but lack ornamentation. He used the “Not One Cent” and Indian Head a lot, implying the sense of urgency for emergency money outweighed his support for merchant advertising. He worked across the road from Charles Horter and likely traded dies with him on occasion.

Smith worked as an engraver. During the Civil War, he used only a few repetitive, simple designs, which were used until the dies wore down and filled. The workmanship is mediocre. 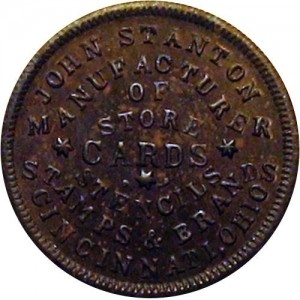 These gentlemen made a business of making store cards. Dealing with about 440 merchants in 12 states, their tokens circulated widely. They struck a number of patriotic Civil War tokens, which all demand high prices today. While they frequently used the Indian Head obverse, they did not use the “Not One Cent” reverse. These tokens are well struck on smaller planchets. Edges may be reeded or plain.

Responsible for the “Wealth of the South” series. Most of True’s tokens bear anti-Union sentiments. He did also make campaign tokens for all four of the 1860 Presidential candidates, including Abraham Lincoln. Several restrikes were made using his dies after the war in off-metals. It is thought that the restrikes were made by John Stanton. But, since the dies were originally Benjamin True’s dies, the restrikes are also attributed to him.

It is thought this die was cut by Anthony C. Paquet, who worked for the US Mint at the time as he was using the die at the Great Central Fair of Philadelphia to make medalets for tourists. 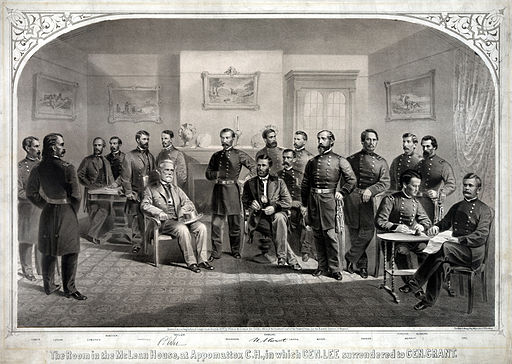 Lee Surrenders to Grant at Appomattox

Founded in wartime in 1812, The Waterbury Button Company has been making stamped metal buttons for over 200 years. They have amassed approximately 40,000 different button dies, each a work of art. Interestingly, they made the buttons worn by both Ulysses Grant and Robert Lee at the Appomattox Courthouse.

For a period of time, they are assumed to have made Civil War tokens. These tokens are unique in that one side tends to have a brass-toned appearance and the other a copper-toned appearance. The tokens are typically large and well struck with raised rims. They were made in large quantities and spread across the Union.

While the die sinker is unknown, his work is signed as “White Hatter Sinker” is shoddy workmanship. He was likely an apprentice where he received little supervision.

Dies: None (All have been re-assigned to Lanphear.)