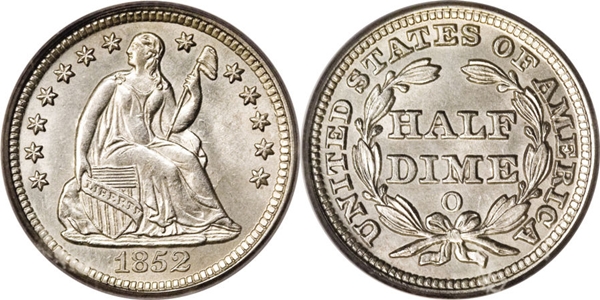 Mint state and key date listed Seated Half Dime values is for graded, certified and authenticated coins in PCGS or NGC holders. The rest are a sample of raw coin sell but this is not a guarantee your coin with the same date, mint, grade and holder will sell for this exact value.

Seated Half Dime Values By Date

The Seated Half Dime series has a few key dates worth a nice premium and this series also boast one of the most interesting numismatic stories in history. The most rare Seated Half Dime is the 1870-S with only one specimen known, but according to mint records it should not exist.

The lone 1870-S example was found in 1978 in a junk dealer’s box; over one hundred years after it was minted, if it was minted in 1870-S – we can’t know for certain. So there could be another hidden somewhere and yet to be discovered. The 1870-S Seated Half Dime value is currently at 1.75 million so the next one to surface will make the owner an instant millionaire!

The common date Seated Half Dime value is anywhere from $5 to $15 depending on how much wear and if the coin is damaged or cleaned.

The higher the grade the higher the premium and the key dates can get extremely expensive in higher grades, and when I say “higher” grades then I am referring to grades of AU (About Uncirculated) and up. Although a few low mintage dates and mints will be expensive in lower grades, this is the exception and not the rule.

The varieties for this series do add a premium but in the lower grades not so much, but once the grade increases then the value differential is much clearer. For example the 1840-O With Drapery, Type 3, Stars on Reverse is $25 in G4 and over $3,000 in AU55, but the 1840 with drapery is $15 in G4 and only $300 in AU55 so the mintage of each variety, plus the grade is going to make the difference in Seated Half Dime Value.

The proofs are extremely rare from 1856 and back with most of them only known for a few specimens, but the later dated proofs after 1856 are rare but just not as much with a starting value of $250 and can the most expensive proof (1837) can go as high as $105,000 if graded by PCGS PR67